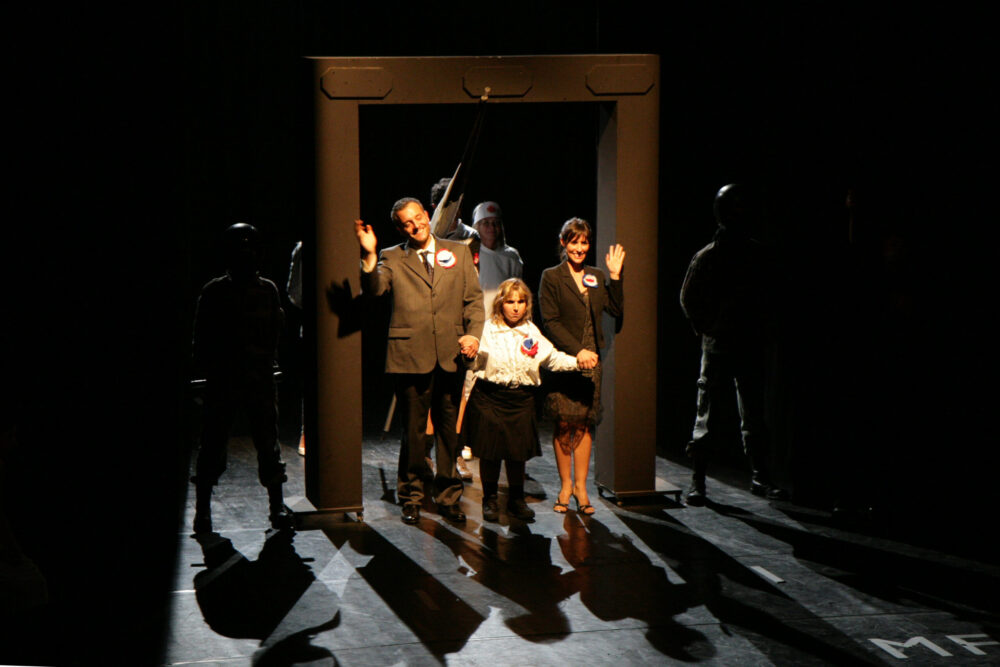 Marat is not just a show. It is the theatrical outcome of something that perhaps is even more than theatre. It is the result of a long journey started in 1999 by a group of disabled people at the Associazione Pleiadi in La Spezia and their staging of Hello Kattrin! after Brecht and IMPUNEMENTE… Woyzeck after Büchner. Marat is the moment where the public witnesses the results achieved, which is “socialized” under the name of show. Conceived in 2005 as a series of “studies” in progressive stages, in the way the tesserae of a mosaic are added piece by piece, the final work was produced with Armunia and presented in Castiglioncello at the opening of the Festival Inequilibrio.07. “We were inspired by the idea of creating a project that is both ethical and artistic, in which the creative process and the onstage result are intertwined” – explains Maurizio Lupinelli who coordinated the process together with Renato Bandoli- giving sustenance to life through theatre and to theatre through life. To create possibilities and necessary friction through theatre. Theatre, therefore, as a laboratory of life, both for the actors and the audience. A project which brings to fruition the collaborative energies of many people and institutions from different geographical territories, where deep cultural values have emerged and are constantly regenerated in artistic visions and creative utopias. A project that has involved disabled and non-disabled people, their families and associations, sector operators and new energies from different backgrounds. Marat therefore comprises almost 60 people on stage, most of them disabled people from the Associazione P.Le.I.A.Di. and the Consorzio Nuovo Futuro in Rosignano Solvay, the actors of Zoe Teatro and many volunteers and young thespians “. The work revolves around the performance of Marat’s murder, staged by the inmates of the Charenton asylum, under the direction of the Marquis de Sade, also a resident of the psychiatric hospital.